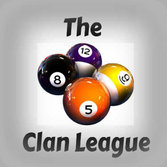 By participating in any of the competitions, clans and their players are agreeing to these rules and any decisions made by the League staff.
9. COMPETITION FORMAT

9.1 League season
All clans will compete in one league playing all of the other clans at least once. The Clan finishing in 1st position at the end of the season will be League Winners.

9.2 Play-Offs
At the end of the league season there will be a Play-Off competition to decide the The Clan League Champions as
follows:-

These matches involve the clans who finish in the top four. They are:

The winners of these two games will progress directly to Week 2 and the losers will be eliminated.

9.3 Game format
All games in the Play-Off stage will be played to exactly the same format as those during the league season - see Section 3 - with the exception that there will be no Completion Bonus points.

9.4 Drawn Games
Where a Play-Off game finishes level on points after all eight individual games have been completed, each team will nominate five players to take part in a sudden death 'tie-breaker'. In the 'tie-breaker' there will be five games drawn at random from the nominated players.

These games will consist of one rack each of US8, US9 and UK8. Three racks in each of the five games and therefore fifteen racks in total. The games may be played in any order, however in the event of any dispute between players over the order then it must revert back to 1) US8 2) US9 3) UK8.

The result of any completed game will also stand unless both players mutually agree to replay it for any reason.

The first team to achieve eight racks will be the winner.

There will be no bonus points for 'Events' during the 'tie-breaker'.